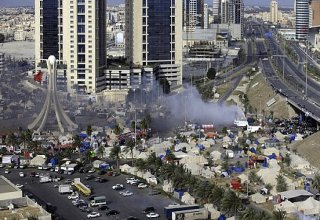 President Dr. Mohamed Morsy has given nearly twelve speeches. Since he came to power in the beginning of July, we have followed him closely as have many others not just in Egypt but in all parts of the Arab and non-Arab worlds.

The Bahraini revolution, which began on 14 February, 2011, is distinguished by several characteristics not found in the other six Arab Spring revolutions.

–        Unlike the revolutions in Egypt, Tunisia, Libya, Yemen and Syria, this revolution did not raise the slogan “the fall of the regime” but rather raised slogans demanding reforms and an end to discrimination against the majority.

–        It is the only revolution carried out by a subjective Shi’a majority – with the participation of large number of Sunnis – against a ruling Sunni minority.

–        It is the only revolution that was repressed by a foreign Arab army composed of primarily Saudi forces under the banner “Island Shield.”

–        It is the only revolution in which on one day 30% of the population left their homes to demand civil liberties and political reforms.

But, it is a revolution in which a Shi’a majority raised the revolutionary banner! And in most Arab states of our Arab world, democracy always excludes a group or segment of the population!

Only in Bahrain does democracy exclude the majority because they are Shi’as. As such, it needs foreign powers to support its ruling minority. But, Wahhabi Sunni Saudi Arabia – the biggest and most oppressive of the states in the Persian Gulf – has a solution: send an army to repress the apostate majority which has demanded liberties and reforms.

I find a logical explanation for Saudi Arabia oppressing the Bahraini revolution, interfering in Yemeni revolution, and opposing Egypt’s and Tunisia’s revolutions.

However, I do not find a logical explanation for Dr. Mohamed Morsy, the president of Egypt, ignoring the Bahraini revolution.

I can find a sectarian religious explanation: the president’s affiliation to the Muslim Brotherhood, a Sunni religious group. But if true, this is a dangerous explanation.

Here, there is no difference between Shi’a, Sunni, Christian or Buddhist, etc as democracy and freedom are the rights of all.

One can oppose the Iranian government due to its authoritarianism but not because it is Shi’a. Nor is it appropriate to ignore the Bahraini revolution because Iran supports it or because Shi’as do not deserve democracy.

To date, Egyptian President Mohamed Morsy’s disregard for the Bahraini revolution has no explanation other than the fact that it is set against a background of either democracy or hostility to Shi’as, both of which are unacceptable.

The stance of Dr. Mohamed Morsy is wrong. As his logic accepts or rejects democracy according to those demanding it, it has dire consequences starting with the acceptance of exceptions within democracy, which may affect the Muslim Brotherhood itself by stigmatising it with an abhorrent sectarianism and a bias towards an oppressive minority due to is Sunnism.

Of course, I have another explanation that is no less likely than its predecessor: avoiding angering the Bahraini and Saudi governments for fear that they will restrict Egyptian workers in their respective countries.

But, in rebuttal, Egypt supported the Libyan revolution against Gaddafi even though Libya may have as many Egyptian workers Bahrain and Saudi Arabia combined.

As a human being, an Egyptian citizen, and a supporter of democracy, I do not consider Dr. Mohamed Morsy’s intentional disregard for the Bahraini revolution as occurring in my name.

As a human being, an Egyptian citizen, and a supporter of democracy, I completely refuse democracy’s exclusion of anyone regardless the reasons – especially if these reasons are sectarian.